While wondering how to mark the fifth anniversary of Michael's passing, I came upon this moving story written by a fellow student at the Budo Kai Karate Dojo. It is an immense comfort to those of us who love Michael to know that his spirit continues to inspire people.

Kongō-zue (Michael Thaler’s Walking Stick)
It is said that every journey begins with the first step. A journey can manifest itself in a variety of ways. It can be long or short. It can be strenuous or effortless. It can also be inconsequential or carry with it great meaning. My friend Chris Brock and I recently had the unique and great pleasure or embarking on a journey of significant meaning. 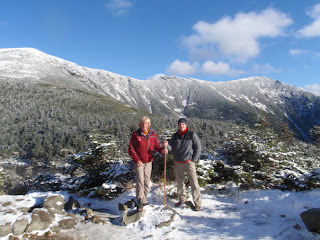 This honor was brought forth to us by our Sensei; Richard Rohrman. Sensei Rohrman had a Karate Ka by the name of Michael Thaler that came into possession of a wooden staff or walking stick. Unfortunately, Michael’s life of peace and beauty prematurely ended due to a horrendous illness. Prior to his demise, Michael told Sensei Rohrman that he would leave some items of remembrance for him. After Michael passed, Sensei Rohrman went to Michael’s home where he met Michael’s sister. Sensei happened to notice a walking stick which Michael’s sister offered to Sensei. The stick had Kanji or Japanese logographic writing down the length of its shaft on all four sides, which none of us at the time understood. Sensei Rohrman believed the stick to carry great symbolic weight and carry with it a tradition of going on or being part of a journey. I remembered that I had planned to go climbing in the White Mountains of New Hampshire in the near future and asked if taking the stick with me to the top of the mountain would be a fitting way to further the continuance of its journey? Sensei Rohrman agreed that it would. I invited Chris Brock to accompany me on this climb and we set out to plan our trip.

Prior to the climb, we planned to stay at a motel near the mountain and start the climb the next morning. I have used this same motel many times in the past and was friendly with the owner; Miyoko Honda. We checked in and it then occurred to me that being of Japanese descent, perhaps Miyoko could translate the writing on the stick. We brought the stick into her office and Miyoko began to read the writing. She said that the stick is a “Prayer stick” that is used by Buddhist monks while traveling between temples. As such, it is an item that should be shown great respect. Miyoko became very interested and told us she would contact her friends in Japan to try to get additional information. Chris and I were now piqued with interest and elated to be a part of this. We offered our sincere thanks to Miyoko and turned in for the night.

The next day we set off for the mountain carrying our now distinguished companion. We began the climb in what was good weather for October. However, as we ascended the wind picked up significantly and the temperature inversely fell precipitously. After many hours of climbing, we arrived at the summit with our acclaimed guest still with us. The temperature with the wind chill was approaching 20 below zero. However, we were warmed by the notion that we had fulfilled our understanding of continuing the journey of Michael’s walking stick.

On our return home, we were contacted by Miyoko who, after contacting her friends in Japan, sent us additional information. Here are her results:

Hi Bob & Chris! I found out more details from my girlfriend in Japan. According to her & her husband, it's called "金 (Kon＝Gold) 剛 (Gou=Hard）杖 (Zue=stick), which is used for a journey visiting temple to temple in Shikoku Island. Those characters in the lower part is a prayer called "Hannya-shinkyou" and in the upper part old letters of Buddhism (Bongo) can be seen. Under the white tape, it's written "南無大師遍照金剛", which is Koubou-taishi (Buddha)'s precious word. Under that it says "同行二人" which she translated that " I'm visiting those temples together with Koubou-taishi praying for Buddha and two of us together always". Does it make sense?

It is most regrettable that Michael Thaler could not have come with us on this journey or even have endured long enough to know that it was undertaken and the tradition of his walking stick was advanced once more. For our part in this saga, Chris and I were profoundly privileged that Sensei Rohrman perceived the meaning and tradition of Michael’s walking stick and asked us to participate in the continuance of its tradition. During the all too brief time we knew each other, Michael Thaler demonstrated a kindness and compassion that touched me deeply. I hope this in some small way keeps the memory of Michael alive. While Michael was still alive, he maintained a blog. The title of this blog is truly the story of this walking stick; “One foot in front of the other.”
Bob Wilson
Nidan
Budo Kai; Traditional Karate and Fitness
Posted by Michael at 9:03 PM 9 comments:

A Candle for Michael 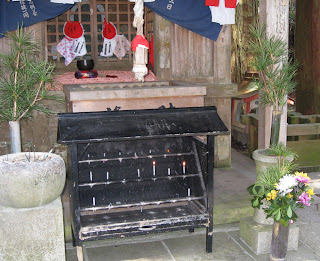 Poems Along the Path

Michael originally published the poems and photographs in this collection in his blog, where they are scattered like jewels throughout the postings that chronicled the last two years of his life. Here, brought together and arranged by the themes into which they naturally fall, the poems tell the same story in a different, but equally powerful way.

Poems Along the Path by Henro1962

For anyone who would like to have a real book to hold in their hands, Poems Along the Path is available through Lulu. Here is the link to purchase a copy:

One of the recurring themes of Michael's photography and poetry is the felt presence of the spirits of the departed. Michael's spirit, which inspired so many people, is still very much alive in his work, nowhere more so than in his account of his Shikoku Pilgrimage and in his photographic Slice of Japan.

Slice of Japan Part I: Chiba Prefecture
Posted by Michael at 11:28 AM No comments:

Slice of Japan Part II: Kyoto
Posted by Michael at 11:25 AM No comments:

Slice of Japan Part III: Tokyo, Kamakura, Nikko, and beyond

Slice of Japan Part III: Tokyo, Kamakura, Nikko, and beyond
Posted by Michael at 11:22 AM No comments:

Slice of Japan Part IV: A Final Look
Posted by Michael at 11:15 AM No comments:

A Tribute to Michael

In the summer of 2007, Michael was thrilled to be accepted as a member of the Soho Photo Gallery. He had planned to have an exhibit in the autumn of that year, but his illness made it impossible. We are happy to bring his plans to fruition. His show, East Village Portraits, will be on view at the gallery through July 4.

Gallery hours are Wednesday thru Sunday, 1-6 p.m. Soho Photo is located at 15 White Street, New York, NY. That is 3 blocks south of Canal Street, between 6th Avenue and West Broadway. The gallery is close to several subway stops: the #1 line to Franklin Street or the A, C, E, N, R or #6 lines to Canal Street.

Michael
I work as a copy editor on the news desk of a big daily newspaper. That means I correct other people's grammar and spelling, and write headlines for their articles. I love to write, I love to read. My photography fills the gaps when words fail (as they often do). I've lived in England and Japan, and consider myself more of a wanderer than someone with roots, even if I don't get to travel as much as I would like. My primary interest is Japan -- its religions, history and culture. In 2002, I was diagnosed with an extremely rare cancer, and my perspective on everything was changed permanently. My blog provides the details but tries not to dwell upon them. (If you would like to purchase gallery-quality prints of some of my photographs, please click the "View my complete profile" link below and then click on the blue e-mail link that will appear to your left.)