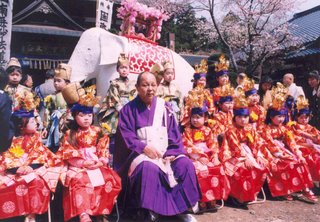 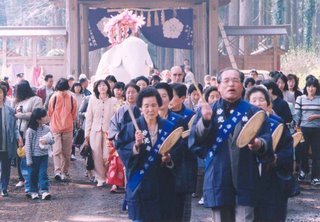 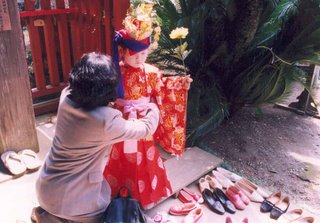 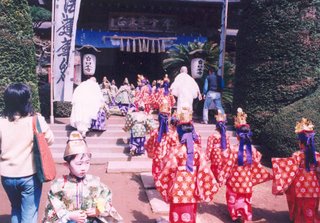 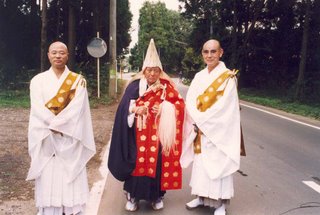 The first four photos were taken on April 5, 1998, at the Buddha's Birthday celebration at Nippon-ji Temple in Tako Town, Chiba Prefecture, Japan. It's a very old and very famous temple of the Nichiren School of Mahayana Buddhism, about a 20-minute drive from where I lived.
In Japan, Buddha's Birthday is called the Hana Matsuri, or Flower Festival. Though most of the Buddhist world marks Buddha's Birthday in May (if I'm not mistaken), it is observed on April 8 in Japan, and if that day is a weekday, processions usually are held on the nearest weekend. It is not a national holiday.
In the first two photos, you can see the white elephant float that is an integral part of the day's procession. It is said that before he was born, Gautama Siddhartha, the future Buddha, appeared to his mother in a vision in the form of a white elephant.
Above is a photo of three clergymen from this temple, taken in October 1996. The man in the center was the head priest, who was a television personality for his discourses on Buddhism.
He died about a year after this photo was taken. His son, a kind and lovely man whose wife is the embodiment of kindness, inherited the temple and became head priest.
I found out about his father's death while visiting the temple with my mother and eldest sister, who had come to Japan to visit me. We lit incense in the old priest's memory (the mourning period was still going on) and reminisced about the day this strange, bearded gaijin with a camera came walking down the path to the temple.
You can see all my Japan photos by clicking here.
Posted by Michael at 10:33 AM

Email ThisBlogThis!Share to TwitterShare to FacebookShare to Pinterest
Labels: Photography

Michael
I work as a copy editor on the news desk of a big daily newspaper. That means I correct other people's grammar and spelling, and write headlines for their articles. I love to write, I love to read. My photography fills the gaps when words fail (as they often do). I've lived in England and Japan, and consider myself more of a wanderer than someone with roots, even if I don't get to travel as much as I would like. My primary interest is Japan -- its religions, history and culture. In 2002, I was diagnosed with an extremely rare cancer, and my perspective on everything was changed permanently. My blog provides the details but tries not to dwell upon them. (If you would like to purchase gallery-quality prints of some of my photographs, please click the "View my complete profile" link below and then click on the blue e-mail link that will appear to your left.)